Mountain Dew Found its Niche Audience, and So Should You! 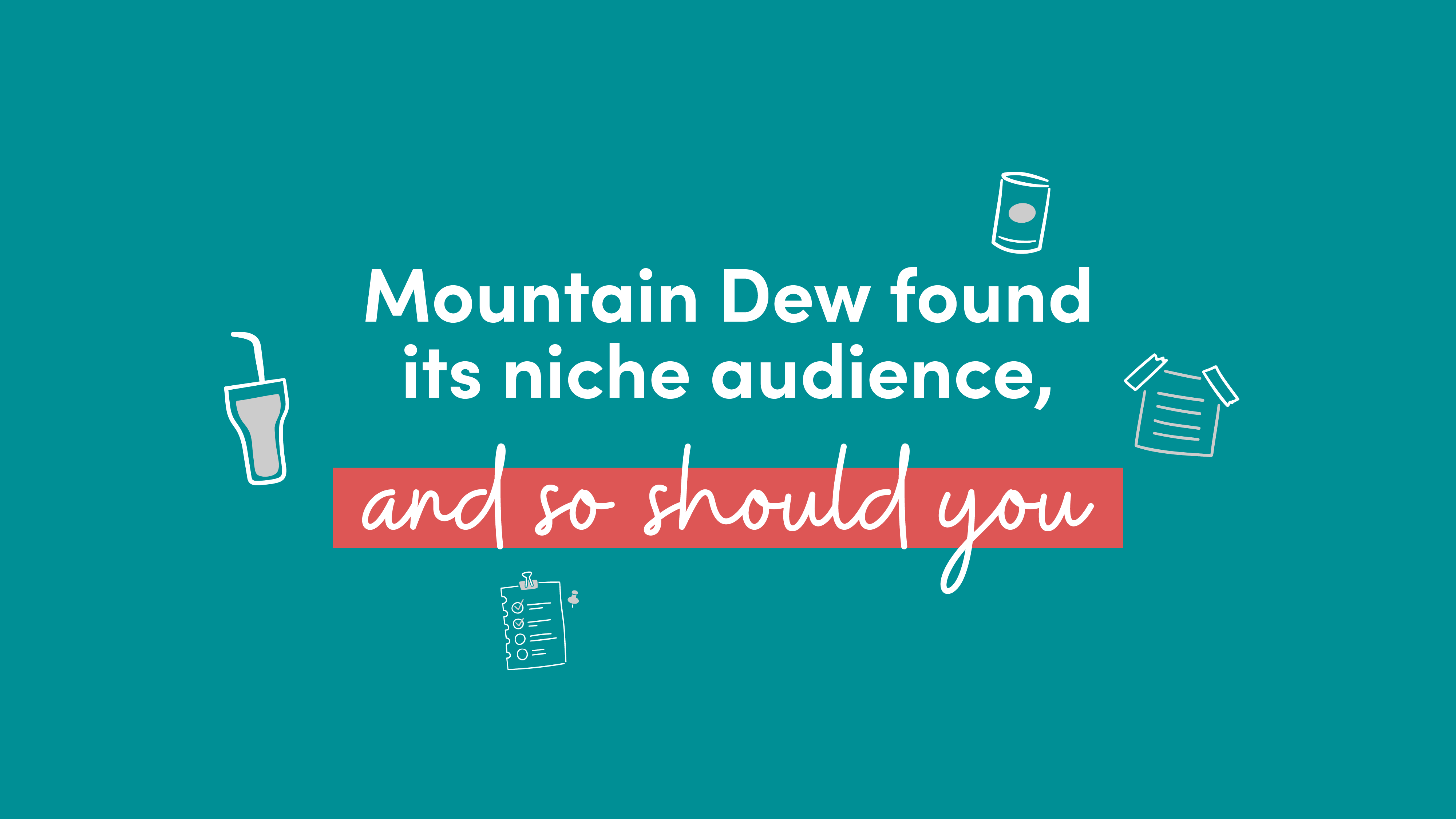 Niche – /niCH,nēSH/: a specialized segment of the market for a particular kind of product or service.

What was once often a term to describe the unknown and unpopular is now something sought after by brands and small businesses. Not only do brands and creators want to discover their niche, but they are also more often trying to uncover a niche audience within their market. This is something that those in the business spend hours trying to discover. Attempting to unearth your niche audience is a concept that has become all too familiar as we’ve emerged into the TikTok era.

Finding that niche has helped some distinct creators find audiences that are truly passionate about whatever it is a brand might be presenting to them. It’s why there are thousands of unique subreddits being created each year. It’s what has helped such oddly specific subsections of content emerge to the forefront such as:

The latter of these is of which I’d like to focus heavily on partially because it’s where I’ve found myself lurking in the past year and a half, but also because it ties back to a brand you and I are both familiar with.

Mid-way through 2020 I found myself picking up a 12 pack of a Liberty Brew Mountain Dew. It was a new summer promotional drink boasting a combination of fifty (yes…fifty) flavors and was available for a limited time. I’d been a casual fan of Mountain Dew ever since I was a kid. My parents recently told me that when I was younger I affectionately referred to it as simply “caffeine” because well… it was caffeinated… and it was also the reason my parents always gave me as to why I often wasn’t allowed to have it. I also nostalgically remember the great “Dew-Mocracy” campaigns from my teen years when Mountain Dew put on a mock election and campaigned three different flavors, and fans were to vote on their favorite that would soon become the next permanent flavor.

I liked the drink, but I wouldn’t classify myself as having been a “fanatic” during my upbringing. So when I found myself putting this 12 pack of dew into my cart in mid-2020, I didn’t think too much of it.

Later that evening as I cracked open the first can I found myself perusing threads on Reddit when I came across a community I was unfamiliar with.

R/MountainDew. Boasting around 20,000 members at the time it was a place for fans to discuss all things, Dew. I quickly discovered the bulk of the group was made up of daily drinkers, video-game fans, sports fans, and those nostalgic for the glory days of Mountain Dew. I was pretty astounded by the discovery of the group. There were really this many people passionate enough about a soft drink that they formed an entire community around it? Evidently so. The feed was filled with countless photos of fans posting which flavor they were drinking today, boasting their collections, pitching their own unique flavors and combinations, telling others where they can purchase limited variants, and posts in anticipation of upcoming new flavors.

I was fascinated, and curious. I found myself feeling a similar rush of excitement that I first experienced during the old Dew-Mocracy campaigns when I was a teen. It was a living and breathing ecosystem of all things Dew, and I was hooked.

Fast forward to today and I would consider myself quite the fanatic. I’m not ashamed to say I’ve amassed quite a collection. Over thirty unique varieties so far, and I feel I’ve barely scratched the surface. I’ve traded flavors with other community members via the postal system. I even started my own Instagram account sporting my collection. Certainly, it must seem a bit strange to the casual viewer. Mailing soda to each other? Buying cans and NOT drinking them? Sporting merchandise that essentially acts as free advertising… for a soda brand? I will be the first to tell you that yes, it’s strange, but it’s something that brings me joy! Something that brings me nostalgia. Something I’m proud of. For the longest time, I didn’t know why all this was happening.

Why was I feeling this way? Why was I so “passionate” about a carbonated beverage?

Then it hit me. I certainly have to be part of what Mountain Dew considers to be their niche audience. It took me a while to come to this conclusion. As someone who works in marketing for a living, I of course had an initial curiosity. Then, certain pieces of the puzzle started to come together. It first hit me when I flipped on the NBA, of which I’ve been a big fan of since my youth, at the beginning of the 2020 season. “The NBA, brought to by Mountain Dew”. Wait… so you mean to tell me that one of my favorite sports to watch is also sponsored by my favorite drink brand? Interesting… Then not long after I walked into my local Casey’s to grab a bottle of Dew and wait… is that a Call of Duty logo stamped right onto a new bottle of Dew? Do you mean…the game I spent hours upon hours of my middle school years playing has a close affiliation with my favorite drink as well? This was starting to get weird. I headed to Mountain Dew’s twitter and… are they seriously posting memes about nostalgic flavors I grew up drinking? On the official Mountain Dew Twitter page? I was beginning to become concerned. Sports. Gaming. Nostalgia. All heavy interests of mine. Was I seriously primed since birth to become a Dew consumer? Well… probably not. More realistically, I was just realizing that I fall right within Mountain Dew’s niche audience.

A quick visit to the official website for Mountain Dew and you’ll see their official “team” is composed entirely of NBA players, outdoors influencers, and extreme sports athletes.

A quick Google search and you’ll come across thousands of “gamer memes” featuring bottles of Mountain Dew at the forefront (it’s become common knowledge that Doritos and Dew are a gamers quintessential choice of snack combination). There are highly coveted “Game Fuel” flavors from years past, featuring Halo and World of Warcraft characters, that often find their way onto eBay at quite the price. Mountain Dew literally produces an energy drink directly targeted to gamers. The evidence is all there. Mountain Dew has found their niche audience. Are there plenty of consumers that fall well outside the audience of gamers and sports enthusiasts? Certainly. But Mountain Dew is a big enough brand. They don’t need to constantly market to the broadest audience anymore. Their product can be bought and seen nearly everywhere by anyone. What they needed was a targeted, core, niche audience that is fervently passionate about the bubbly green stuff, that will support them with pride.

A key principle that I learned early on as I entered the marketing industry is that when you market to everyone… you market to no one.

Constantly targeting the broadest audience possible will often leave you with little to no results. You need to know who enjoys your content, or who would be willing to buy your product. Finding that niche audience is as big a challenge as any, but it’s arguably one of the most rewarding things a brand or content creator can discover. Once that discovery is made, you’ll have a sort of safety net. An audience you can cater to, and create content and products directly for. Although of course not directly, Mountain Dew certainly found that in me. I find myself browsing the subreddit almost daily. I’ve joined a discord discussion group. I follow all the news on upcoming products. I am a locked-in, bonafide Dew Lover.

If you take anything away from this blog post, let it be this. Seek out an audience that supports you.

One that will allow you to create the things you desire as a brand or creator. Having an audience that’s passionate about what you do will lead to success and growth.